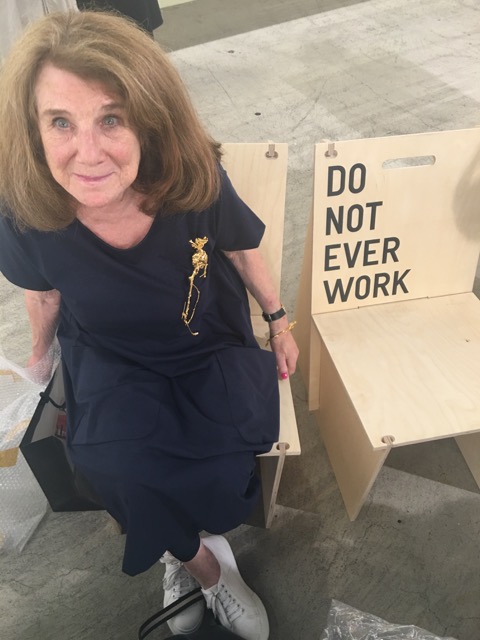 In 1959, De Jong moved to Paris where she joined the International Situationists, the artistic and intellectual movement founded by Guy Debord, Asger Jorn and Constant Nieuwenhuijs, among others. Between 1962 and 1968, De Jong is the editor and publisher of The Situationist Times, the cahier of the Situationists to which various artists, poets and intellectual such as Roberto Matta, Wifredo Lam and Jacques Prévert contributed.

From the early 1960s, De Jong worked on a diverse body of work that included painting, drawing, printmaking, sculpture, and jewelry making. Although diverse in medium, the works are linked by a strong personal signature that is nurtured by the historical avant-gardes, but at the same time goes against them and seems to formulate an answer to them. De Jong continues to renew and feed herself through contemporary art and the world around her. In this way her work avoids the pitfall of repetition, and it remains captivating and topical.

Together with Thomas H. Weyland, she established the Weyland de Jong Foundation in 2008. Its main purpose is to support avant-garde artists of all disciplines, architects and artist-scientists over fifty. In the rich artistic career that De Jong has, she exhibited - and still exhibits, worldwide. Recently she had solo exhibitions at the Stedelijk Museum (Amsterdam), Museum Jorn (Silkeborg, Denmark), Malmö Konsthall (Malmö, Sweden), Musée des Arts Décoratifs (Paris, France). Currently, the solo exhibition The Ultimate Kiss is running at WIELS (Brussels).

In this KASK lecture De Jong will talk to Monali Meher, an artist who currently lives in Ghent, but whom De Jong got to know in Amsterdam where Meher attended the Rijksakademie in the early 2000s. Like De Jong, Meher works in various media, although her main medium is performance. In her performances and in many of her other works, the body is central. The body as a mirror of identity, or as a zero point from which journeys begin. Alongside, or with the body, time forms a constant in Meher's performances, whether as a wrapped object or a performance. She uses time as a medium, which is stretched, compressed or captured. The aspects of continuity, repetition, fragility, duration, temporality, awareness and public engagement are inherent qualities that recur in her art practice.

At first glance, De Jong's and Monali's lives and practices differ greatly. However, there are things that bind them together; in both cases they are women whose lives and practices have been shaped by the travels they have made, both physical and artistic. Moreover, they both have an interest in the potato. De Jong uses the sprouted potatoes to make jewelry and Monali uses them as part of her performances. Meher says, "The use of natural and ephemeral ingredients in my work results in a process of impermanence in a brief moment of time. This is utterly, therefore inevitable and intentional. Such assemblages and installations are temporary constructions in time and space created within the "performance.

The conversation will be conducted in English.