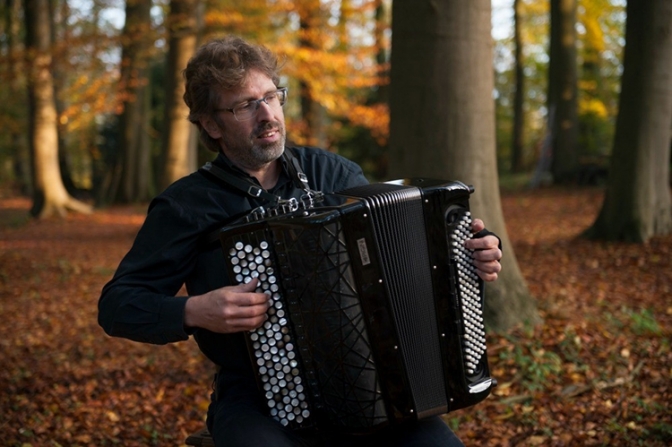 Philippe Thuriot was born in Brussels and is an all-round accordionist and eminent performer. He studied accordion in Antwerpen and at the Music Academy of Copenhagen under the tutelage of Mogens Ellegaard. Through the years he has won several international prizes among which are prizes in the international accordion contest Hugo Herrmann-Wettbewerb in Germany and Tenuto in Belgium. He has performed as a soloist in many ensembles and orchestras such as Prometheus, Oxalys, the VRT-philharmonic orchestra, Ictus and the Ensemble 20. Jahrhundert in Vienna. He has toured for instance twice with the international dance company Les ballets C de la B by Alain Platel. The first tour was in 1996 with the production La Tristeza Complice (Henry Purcell /Dick Van der Harst) and the second tour was in 2008 with Pitié (J.S. Bach/Fabrizio Cassol). This world tour ends in Kinshasa and was filmed by Arte. He performed in music theatre productions from Walpurgis with music from Peter Vermeersch and with the  Muziek Lod. But his first love is never far away : improvisation, jazz and original compositions. He regularly does concerts with Philipe Catherine, Aka Moon, Uri Caine, Tcha Limberger, Steve Houben, Jacques Pirotton, which are only a few established names in the world of jazz. He wrote for Radio Kuka (jazz band) in collaboration with jazz musician Ellery  Eskelin from New York (CD De Werf). The vocal ensemble Capilla Flamenca invited him to improvise on works from the 15th century composer Alexander Agricola. This resulted in a wonderful tour with concerts in the Netherlands, France, Poland and the Czech Republic.