Shirin Sabahi’s projects often derive from a physical place and include films about artifacts and architecture and their legibility and outreach. At KASK, she will present a recent body of work including two films and a book. The project revolves around Matter and Mind, a sculpture by another artist, Noriyuki Haraguchi, permanently installed at the Tehran Museum of Contemporary Art since the museum’s inauguration in 1977. The sculpture is a steel basin filled with used engine oil. Sabahi organized and documented the restoration of the artwork, which over time has become a receptacle of objects, from coins and pebbles to children’s toys, thrown by the visitors who would test the liquidity of the object’s sleek surface in disbelief.

Sabahi’s lecture is a fitting counterpart to Gabriel Kuri's materialistic approach that we had in our previous lecture. Just like Kuri, her fascination goes out to 'banal' objects as a catalyst for the world around us.

Shirin Sabahi grew up in Tehran, studied Fine Arts in Malmö and now lives in Berlin as an artist and filmmaker. Selected 2019 exhibitions and screenings include Centro Botín (Santander), Mosaic Rooms (London), Jameel Art Center (Dubai) and Montréal International Festival of Films on Art. Her films won the best experimental film award at the Lisbon Architecture Film Festival and the best short film award at Asolo Art Film Festival (both 2019). In Berlin she hosts PLACES, an ongoing series of events at various venues where speakers are invited to present a place, imagined or otherwise. 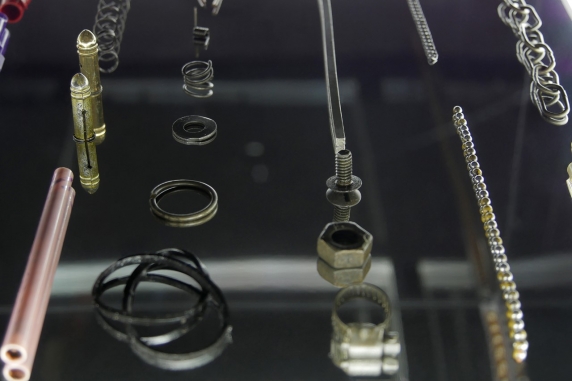