Mysteries and myths are a recurring element in Taus Makhacheva's work. In search of stories, Makhacheva starts projects in which she brings together different personalities and worlds. How is culture, or civilizations, created and what happens when traditions come into contact with each other? In many cases, her search starts with art history, but without focusing on a particular canon, period or geographical place. It is a belief in a general interconnectedness that characterises and guides her practice. What do the dreams, delusions or inventions of forgotten people and cultures tell us and what is their relevance for current generations? Makhacheva shows that art history is not static, but in her hands a fluid whole that can acquire new meaning.In many cases, this meaning does not come solely from 'the hands' of Makhacheva; she works together with students, writers, sound artists, jewellers, sculptors, architects and costume designers. In this, Makhachevas assumes the role of a catalyst, creating a chemical reaction from which different outcomes take shape.

This is not a purely critical or analytical approach, but equally humorous and playful, questioning cultural conventions or gender roles. In her well-known video Tightrope, tightrope walker Rasul Abakarov, a fifth generation descendant of a Dagestan dynasty of tightrope walkers, carries paintings and works on paper related to the history of Dagestan visual art from the second half of the 19th century up to the end of 20th from one mountain to another on a rope across a cliff. During this exercise, the works replace the balancing stick. From a linear arrangement on one side of the mountain, the works are taken to a cube-like structure - a 'cube', recalling modernist art spaces. Abakarov 'performs' Dagestan culture, while at the same time re-ordering Dagestan modernist painting on the other mountain. The works are selected by Makhacheva and date from the 19th century, until the year 2000. A period when Dagestan became part of the Russian Empire after they conquered it, and socialist realism became the prevailing style during the Soviet era. Alongside this, later experiments that recall pop art or abstract expressionism. The period chosen by Makhacheva visualises a certain history of modern art in Dagestan, which is rewritten during Tightrope by the physical act of rearranging. Tightrope raises questions about the centre and margin of art history and the visibility and invisibility of certain historical and art historical narratives over others that are present in the museum. Art history is not neutral, but can be rewritten, or at least rearranged. It is an organism in the hand of the inspirer, the artist or the tightrope walker.

Register via the Eventbrite link and you'll receive the ZOOM webinar link automatically. After the lecture there will be a Q&A with the artist. If you want to watch the lecture on a later date, check our youtube channel. 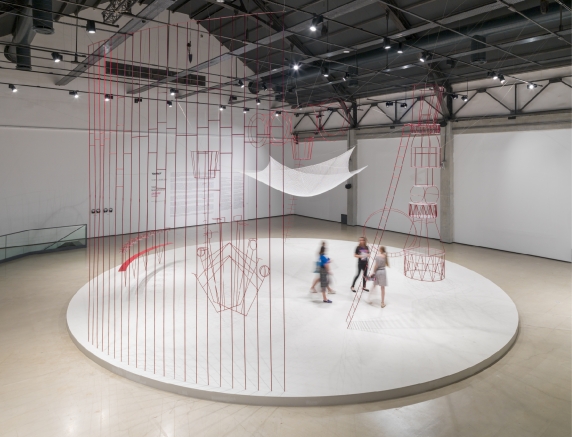