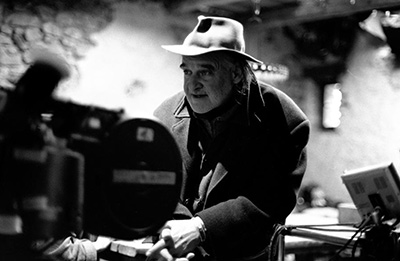 
It may seem as if I’m standing here on my own, speaking only for myself, but in fact I will speak with the voices of many if not all the students, teachers and alumni of this school.

Ever since the first rumors about your visit at our school made their rounds here at KASK everyone here has been excited. No one ever asked a question why you would receive this honorary award since your work has carved a deep trail not only in the film department, but throughout the institution.

Your films are the source of inspiration for people to come here and make films themselves, we watch them together and reflect on what we saw in our papers and dissertations. Teachers across the many art departments we have here rely on your work to fortify their lectures.

To accurately describe any of your work here is an impossible task for me since I’m neither poet nor a writer. Besides that, I think that your work defies any description. The only rightful thing to say, in my case, is that I never watch your films but I experience or perceive them. They contain this rare quality, that is only shared with great music, of communicating directly, bypassing any form of intellectual reasoning, with something inside, which you might call the soul.

The experience you offer to us prioritizes sensing over understanding. It’s filmmaking that cuts straight to the essence.

I came to this school to explore ways of expressing myself through visual means, helped by teachers that don’t preach or teach but kindly show me possible paths to follow, never forcing me in any direction.  The only demand is to find your driving force and to work with uncompromised commitment. Why do I want to make something, what do I want to express, what am I doing here?

What strikes me most in your work , aside from the artistic mastery, is the presence of your relentless driving force throughout your whole oeuvre. From the first film to the last, in every scene and every shot, down to the smallest fiber of a frame, we feel your compassion for humanity.

And although it seems like an impossible endeavor to make films of such beauty for a beginning filmmaker, I don’t think that any student should ever give up on his or her aspirations to make such monumental work but maybe it’s not the starting point. When considering your work, we should acknowledge that the The Turin Horse could have never have come into being without all the films that preceded it all the way up to Family Nest. A film you started shooting today exactly 40 years ago.

With every consecutive film you worked your way closer to your thematic essence, while guarding over the dignity of your characters. With every step the all-encompassing image of the core you want to express became clearer and clearer until everything that could be left out was carved away.

I think that’s a valuable lesson for everyone here, and the main reason to honour you with this award: Commit yourself and follow your driving force, the thing that makes you want to wake up in the morning, and fight the rest of your life, in every work you make, to express it in the most truthful way possible. And until then, to quote the bartender driver Kelemen from Satantango: “... keep plodding and plodding and plodding..’

And now I would like to invite you to sign our schoolbook and add your name to a long lineage of other people that were of importance to our school.